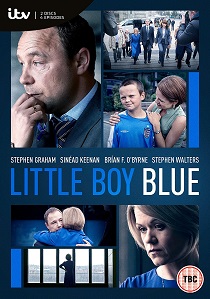 Based on a true story that shocked a nation, this powerful four-part factual drama, from BAFTA winning writer and executive producer Jeff Pope (Appropriate Adult, The Widower), centres on the devastating impact on a city of an innocent child's murder amid a wave of gang violence. In August 2007, while walking home from football practice in his England kit, 11-year-old Rhys Jones was unwittingly caught in the crossfire of a gang war. Shot in the neck outside the Fir Tree pub in Liverpool's Croxteth, he died in his mother's arms.

Made with the support of Rhys's parents, Melanie and Steve, Little Boy Blue explores their ordeal and looks at the agonising dilemmas of witnesses faced with becoming pariahs for speaking up. It tells the story of the long and extensive investigation, led by Merseyside Police SIO David Kelly, that eventually brought Rhys's murderer and his associates to justice.

Little Boy Blue is released on DVD by ITV Studios Home Entertainment on 29th May 2017.

UHD
The ninth film from the writer-director Quentin Tarantino features a large ensemble cast and multiple storylines in a tribute to the final moments of Hollywood's golden age as Once Upon a Time... in ... END_OF_DOCUMENT_TOKEN_TO_BE_REPLACED
Hot PicksView