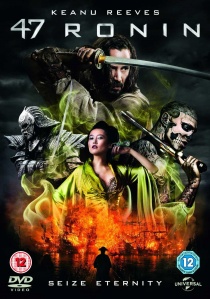 Keanu Reeves (The Matrix trilogy, The Day The Earth Stood Still) stars in a reimagining of one of Japan's timeless tales, 47 Ronin, available on Blu-ray 3D, Blu-Ray and DVD on 14th May 2014 from Universal Pictures UK.

Based on an epic story, this extraordinary tale of inspiring courage has its origins in the early 18th century. After a treacherous warlord kills their master and banishes their kind, 47 leaderless samurai vow to seek vengeance and reclaim their honour. Transformed into a thrilling, visually stunning 3D film by director Carl Rinsch, 47 Ronin tells the story of a small group of warriors, or ronin, on a quest to avenge the death of their master. Battling across a savage world of mythical beasts, shape-shifting witches and wondrous terrors, the ronin must seek help from kai (Reeves), an enslaved half-breed they once rejected - in their ultimate fight for redemption.

Keanu Reeves leads an international cast that includes Hiroyuki Sanada (Sunshine, The Last Samurai) as Oishi, the leader of the ronin; Tadanobu Asano (The Wolverine, Thor: The Dark World) as Lord Kira, the treacherous villain who will stop at nothing to destroy his enemies; Academy Award®-nominated actress Rinko Kikuchi (Babel, Pacific Rim) as the Witch, a siren who executes Kira's deadly plans; and Ko Shibasaki (The Lady Shogun and Her Men, One Missed Call) as Mika, the forbidden love of Kai's life.

UHD
Disney and Pixar's original feature film Luca, released on DVD, Blu-ray and 4K UHD on 23rd August 2021, is a fun and heartwarming story about friendship, stepping out of your comfort zone and two ... END_OF_DOCUMENT_TOKEN_TO_BE_REPLACED
Top PicksView