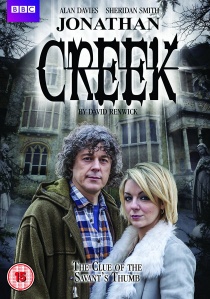 It's time to dust off the duffle coat as Alan Davies (Whites) and Sheridan Smith (Mrs Biggs) return to star in the brand new Jonathan Creek mystery - Jonathan Creek: The Clue of The Savant's Thumb, available on DVD from BBC Worldwide on 6th May 2013.

When a dead body impossible vanishes from a locked study it is only the first in a chain of dark mysteries confronting Jonathan Creek and self-styled paranormal investigator Joey Ross.

A grisly murder, the macabre history of a Catholic girls' school, a sinister local society and a series of increasingly puzzling, interlocking clues from the backdrop to another weird and wonderful case for Creek and Joey - this time however, they find themselves merely junior players in an inquiry spearheaded by the flamboyant and indomitable detective inspector Gideon Pryke.

Using his powers of deduction and lateral thinking, Creek races against time to uncover a number of intriguing clues which lead him to the unbelievable truth. Can he once again render the impossible, possible?

3D-BD
The grave course of events set in motion by Thanos that wiped out half the universe and fractured the Avengers ranks compels the remaining Avengers to take one final stand in Marvel Studios', Avengers ... END_OF_DOCUMENT_TOKEN_TO_BE_REPLACED
Hot PicksView

Fans, aficionados and collectors are in for a treat as horror maestro George A. Romero's long-awaited, highly anticipated Dawn of the Dead, finally gets the home entertainment release it deserves from Second Sight Films on 16th November 2020.