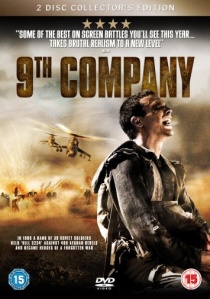 The Russian nomination for Best Foreign Film at the 2007 Academy Awards and post-communist Russia's highest grossing film to date, 9th Company is a stirring and extremely timely modern day war movie on a par in scope and scale with Hollywood blockbusters such as Full Metal Jacket and Platoon. Now this "full throated and very exciting war movie" (The Evening Standard) comes presented as a deluxe double disc DVD release from Contender Home Entertainment on 11th June 2007.

9th Company is based on real events that devastatingly culminated on 8th January 1989 on the Djardan "3234" Heights of Afghanistan, 9th Company follows the ill-fated fortunes of a small group of young Soviet soldiers, from the trials of boot camp to their arrival in the heart of the war zone and the climactic, bloody battle where 39 of them held their own against 400 Afghan rebels in a remarkable test of endurance that made them heroes.

An epic in every sense of the word - over 1,500 extras, 30 T-64-B tanks, 10 MI-24 and 10 MI-8 helicopters, and 22 AN and MIG fighter planes were employed during the filming of the movie's impressively realistic battle sequence set-pieces. The film is a technical triumph, featuring superlative acting performances, exceptional cinematography and a truly frightening 20-minute final sequence that illustrates in terrifying detail the true horrors of modern day warfare.

Directed by Fyodor Bondarchuk (son of acclaimed director Sergei Bondarchuk) 9th Company is the first big-budget modern-day war epic to come to the UK from Russia. Drawing obvious parallels to numerous conflicts occurring around the globe today, 9th Company is a tense, "impressive" (Empire) and tragically topical war film that demands to be seen.