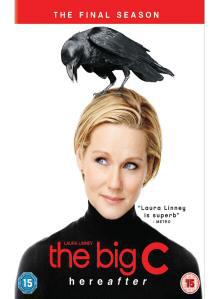 Laughter proves once again to be the best medicine when Sony Pictures Home Entertainment releases The Big C: The Final Season on a 2-disc DVD set on 14th April 2014.

The critically acclaimed Sony Pictures Television original series stars Laura Linney, Golden Globe® winner for her role as Cathy Jamison, a suburban wife and mother and teacher who is diagnosed with stage-four melanoma and opts to fight back through humour and sarcasm, as well as some spontaneous choices along the way. The Big C also stars Oliver Platt (Frost/Nixon), Gabriel Basso (TV's The Middle), John Benjamin Hickey (Transformers: Revenge of the Fallen) and Gabourey Sidibe.

The Big C: The Final Season gets the star treatment with special guests including celebrated actresses Kathy Najimy and Alan Alda and fashion icon Isaac Mizrahi.

In the final season of The Big C, Emmy® and Golden Globe® winner Laura Linney reprises her role as Cathy Jamison, who comes to a realisation about her battle with skin cancer. Deciding to quit chemotherapy, Cathy finds peace and resolution with her husband (Oliver Platt, 2012), son (Gabriel Basso, The Kings of Summer) and even her estranged father (Brian Dennehy, First Blood). With four one-hour episodes, Cathy's journey is filled with laughter, tears and poignancy - a fitting farewell to this acclaimed series.

BD
In The Duke, released on DVD and Blu-ray 13th June 2022 from Warner Home Video, Kempton Bunton, a 60 year old taxi driver, steals Goya's portrait of the Duke of Wellington from the National Gallery in London. END_OF_DOCUMENT_TOKEN_TO_BE_REPLACED
Top PicksView