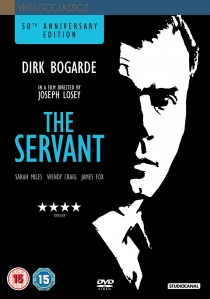 Digitally restored, directed by Joseph Losey with the screenplay by Harold Pinter adapted from the novel by Robin Maugham, StudioCanal are proud to announce the DVD and Blu-ray release of the 50th anniversary of Joseph Losey's The Servant on 8th April 2013.

Marking the start of what became one of the most potent creative partnerships of British 1960s cinema, Losey and acclaimed playwright-turned-screenwriter Harold Pinter united to create a disturbing tale of seduction, sexual and social tension and psychological control. The Servant is a stunning dissection of two men, the idle, wealthy young bachelor Tony (James Fox, Performance, The Remains Of The Day) and his new servant Barrett (Dirk Bogarde, Accident, Death In Venice). Pinter's razor sharp script unravels the ups and downs of class warfare and sexual games, as the two men play a constant tug of war for power.

Recently returned form Africa, Tony recruits Barrett, a 'gentlemen's gentlemen', to get his life in order. Barrett initially seems like a paragon of domestic virtue and they settle comfortably and closely into their roles as master and servant. Only Tony's perceptive bride-to-be Susan (Wendy Craig), increasingly threatened by the control Barrett is imposing on her fiancées life, starts to suspect something is amiss and makes her loathing of the manservant increasingly clear. When Barrett introduces his supposed "sister" Vera (Sarah Miles, Blow-Up, Hope And Glory) into the house as maid, the psychodrama escalates as Vera, with Barrett's encouragement, soon insinuates herself into Tony's bed. Are the pair working together to play upon Tony's vulnerabilities, whether for fun or profit? As their perverse psychological grip on Tony tightens, the power dynamic between Tony and Barrett dramatically switches and in their increasingly mutually dependent, often erotically-charged relationship, Tony becomes the eager-to-please lackey and Barrett starts to hold the reigns of power.

Time praised Bogarde for "the most substantial role of his career" and the Daily Telegraph proclaimed, "he has never done anything better-a wonderfully macabre suggestion of a brutal nature beneath a smooth surface". Winning three BAFTA awards, including Best Actor for Bogarde and Most Promising Newcomer for Fox, Douglas Slocombe's sleek black and white photography of the gloomy London settings earned the film a third and - beautifully complemented by Johnny Danworth's wistful jazz score - is one for the film's finest assets.

Drawn from a 1948 novella by Robin Maugham (nephew of Somerset), The Servant was inspired by Maugham's own experiences renting a friend's house after the war, the home coming with a manservant, whose sinister presence greatly unnerved him. With both the novella and Film arriving before the decriminalisation of homosexuality, the homoerotic nature of the central relationship had to remain entirely implicit and the narrative allow for multiple interpretation, but Pinter's sharp nuanced script and Losey's artful visual cues have earned the film a reputation as one of the landmarks of gay cinema.

The Servant remains a seminal title in British cinema. Maintaining a debauched and decadent air but still invested with the realism and incisive take on human relationships of the British New Wave, it is still one of the most expertly realized portraits of British class warfare ever committed to screen. Studiocanal is delighted to introduce a new audience to the film in cinemas March 22nd with a new pristine restoration.

The Servant will feature specially created new extras including award winning director Richard Ayoade (Submarine) interviewing James Fox and new interviews with Wendy Craig and Sarah Miles. In addition a Blu-ray release will come in the form of a Studiocanal Collection series disc with the accompanying exclusive packaging and exclusively created booklet and further unique featurettes including an interview with Stephen Wooley, archive interview footage and others with film experts and biographers to create an ultimate 'cinephile' edition for the collector.

DVD
Disney and Pixar's original feature film Luca, released on DVD, Blu-ray and 4K UHD on 23rd August 2021, is a fun and heartwarming story about friendship, stepping out of your comfort zone and two ... END_OF_DOCUMENT_TOKEN_TO_BE_REPLACED
Top PicksView