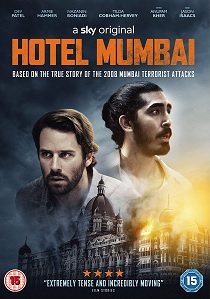 A heart-stopping yet inspiring take on a tragic factual event showcases the power of human connection, Hotel Mumbai, released on DVD and Blu-ray 20th January 2020 from Universal Pictures (UK).

Directed by Anthony Maras (The Palace) and written by John Collee (Happy Feet, Happy Feet Two) and Maras, Hotel Mumbai, is a true story of humanity and heroism that vividly recounts the 2008 siege of the famed Taj Hotel by a group of terrorists in Mumbai, India. Among the dedicated hotel staff is the renowned chef Hemant Oberoi (Kher) and a waiter (Patel) who choose to risk their lives to protect their guests. As the world watches on, a desperate couple (Hammer and Boniadi) is forced to make unthinkable sacrifices to protect their newborn child.

Hotel Mumbai, on Blu-ray and DVD includes special behind-the-scenes featurettes with commentary from the director and cast to give viewers a more in-depth look into the making of the film and the tragic event that shook the world.

BD
A notorious criminal must break an evil curse in order to rescue an abducted girl who has mysteriously disappeared in Prisoners Of The Ghostland, released on DVD and Blu-ray 15th November 2021 from ... END_OF_DOCUMENT_TOKEN_TO_BE_REPLACED
Top PicksView