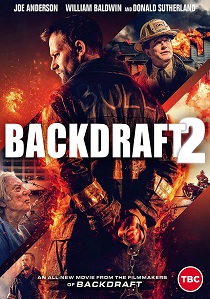 Fire investigator Sean McCaffrey, son of the late Steven Bull McCaffrey, is now working at the same Chicago firehouse along with his uncle Brian (William Baldwin). When Sean is assigned to investigate a deadly fire, he and partner Maggie soon realise that they are dealing with something much more than a routine fire.

The clues they discover lead them down a treacherous path of arson, murder, and international terrorism. Sean must use his intuition, along with the help of infamous jailed arsonist Ronald Bartel (Donald Sutherland), in a race to find out who is behind the fire and stop them from accomplishing their devious plans.

BD
A decade-defining classic from the imagination of Steven Spielberg and Chris Columbus, celebrating its 35 year anniversary, The Goonies is released on 4K UHD 31st August 2020 from Warner Home Video. END_OF_DOCUMENT_TOKEN_TO_BE_REPLACED
Hot PicksView