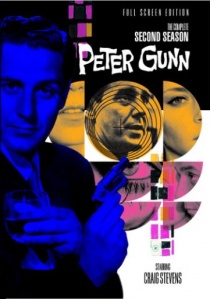 Peter Gunn was a new kind of detective - the ultimate in composed style and swagger. This top rated drama filmed in atmospheric film noir, originally aired on the NBC network in 1958 and introduced audiences to the handsome, dashing and consistently well dressed Gunn, played by Craig Stevens. With Season 1 already available to buy, detective story aficionados should catch the second instalment from the suave and sophisticated Peter Gunn, when Season 2 is released on DVD by Liberation Entertainment on 1st October 2007.

The music and hit theme song from the Peter Gunn series were created by legendary composer Henry Mancini, who skilfully merged music with mood and story to create what many regard as an early Miami Vice. Gunn hung out at trendy jazz club 'Mothers', crossing paths with hit men and hoodlums, ably assisted by his long suffering police contact Lieutenant Jacoby (Herschel Bernardi) and his best-gal, singer Edie Hart played by Lola Albright.

Created by Blake Edwards of Pink Panther fame, Peter Gunn was a highly-innovative and influential show. Combining witty dialogue with snazzy clothing and elaborate camerawork the series ran for two years on NBC, and then for another year on ABC.