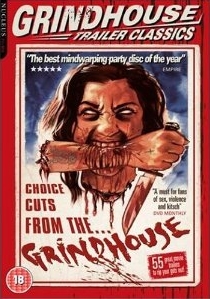 News
News Article Go back to homepage
Get ready for a two-hour trip to the "gory days" of cult and exploitation cinema in Grindhouse Trailer Classics, a crazed compilation of theatrical promos released on DVD by Nucleus Films on 24th September 2007.
Nucleus Films
Unknown
24/09/2007
Thank you for supporting DVD365.net when you order using the link(s) below. As an Amazon Associate we earn from qualifying purchases
Buy DVD
Information

Compiled by genre movie expert Marc Morris (co-author of Shock! Horror! Astounding Artwork from the Video Nasty Era) from his own personal archive of over 7000 titles, along with the assistance of director Jake West (Pumpkinhead: Ashes To Ashes; Evil Aliens; Razor Blade Smile), Grindhouse Trailer Classics brings you a hand-picked collection of mind-blowing trailers for the 1960s and 1970s cult movies that have inspired and informed the works of a whole generation of contemporary directors, including the likes of Quentin Tarantino (Death Proof), Robert Rodriguez (Planet Terror), Eli Roth (Hostel) and Rob Zombie (The Devil's Rejects) - films such as They Call Her One Eye, The Thing With Two Heads, Three On A Meathook, Ilsa: She Wolf Of The SS, Children Shouldn't Play With Dead Things, Blood Sucking Freaks, The Corpse Grinders, Wham Bam Thank You Spaceman and many more.

Grindhouse Trailer Classics also includes a bonus featurette that explores the history of Grindhouse cinema, Bump n' Grind, presented by Emily Booth (star of Evil Aliens and Pervirella and presenter of the TV shows outTHERE and Shock Movie Massacre) and written by Stephen Thrower, the acclaimed author of Nightmare USA: The Untold Story of the Exploitation Independents. And if that wasn't enough for genre fans, the DVD also features exclusive artwork by illustrator and painter Graham Humphreys, the artist behind the theatrical poster campaigns for The Evil Dead and A Nightmare On Elm Street, and whose artwork has graced the album sleeves of bands such as The Cramps and The Lords Of The New Church.

So if it's a smorgasbord of cinematic sex, gore and violence you're looking for to satisfy your hunger for fun, shocks and entertainment, look no further than Grindhouse Trailer Classics, the only DVD you'll ever need to get your own Grindhouse party started.