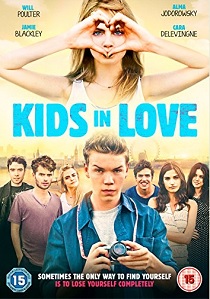 Set against the backdrop of an underground, bohemian London, Kids In Love, released on DVD on 29th August 2016 courtesy of Signature Entertainment, offers a new take on the traditional coming of age story.

Drifting through his gap year with internships and travel plans, Jack (Will Poulter) has always suspected there was more to life than this. A chance encounter with the beautiful and ethereal Evelyn (Alma Jodorowsky) and her friends, including free spirited Viola (Cara Delevingne), swerves his life radically off course. She is like no one he's ever met before, and he quickly becomes caught up in a whirlwind of all-day parties and wild nights in London's hidden dives with her charismatic friends.

Giving up everything to follow Evelyn and her hedonistic lifestyle, it takes Jack a while to realise what he's leaving behind, that love isn't a game you want to lose and that these people might not be the kindred spirits he first thought.

Related Articles
Detroit, The Revenant, Glassland, The Maze Runner, Plastic, We're The Millers, Wild Bill, The Chronicles of Narnia: The Voyage of the Dawn Treader, Son Of Rambow, Son of Rambo, Midsommar
Valerian and the City of A Thousand Planets, Suicide Squad, Paper Towns, The Face Of An Angel
Plastic
Irrational Man, If I Stay, Vinyl
Fisherman's Friends, Traces: Series 2
For your consideration

HotUHD
After moving to a new town, two brothers discover that the area is a haven for vampires as the classic The Lost Boys is released on 4K UHD 20th September 2022 from Warner Home Video. END_OF_DOCUMENT_TOKEN_TO_BE_REPLACED
Top PicksView