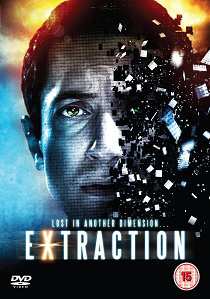 Lost in another dimension, starring Sasha Roiz, Jenny Mollen and Dominic Bogart, Extraction is released on DVD and Blu-Ray on 26th August 2013, courtesy of Signature Entertainment.

Thomas Jacobs is a brilliant engineer who invents a device that enables him to enter the mind of a patient and observe them in their memories. Having run out of funds to complete the project, he reluctantly partners with the Justice Department who plans to use it to see criminals enact their crimes, BUT, during the first test on a convict, Tom gets trapped, leaving behind a pregnant wife and his unconscious baby.

For four years Tom is stuck in the criminal's mind until he discovers a glitch in the system. It soon becomes a race for survival as Tom is forced to work with the reluctant criminal to find a way out.