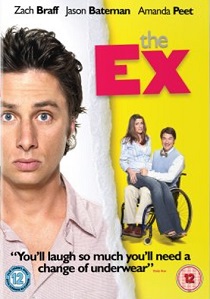 Icon Home Entertainment are pleased to announce the 24th September 2007 DVD release of the hilarious and engaging madcap comedy The Ex, a heady mix of romance, rivalry and revenge.

Slacker Tom Riley (Braff) is a man without a plan but when his wife Sofia (Peet), a successful lawyer decides to throw it all in for a career as a full time Mum he is forced to step up and provide. Taking on a job for his father-law as an Assistant Associate Creative for Sunburst Communication Tom uproots his family and moves to Ohio. Things go from bad to worse when his boss and wife's ex, overachieving wheelchair bound Chip, (Bateman) will stop at nothing to see him defeated. Tom is the only one who sees Chip as the cold, calculating and ego-centric sociopath that he is and Chips dirty tactics are as relentless as they are ingenious. Tom's world is turned upside down as his resulting paranoia threatens his marriage and everything he holds dear.