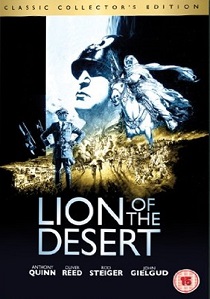 Directed by Moustapha Akkad (The Message), the legendary producer behind the Halloween movies and starring a trio of Oscar winning actors in Anthony Quinn (List For Life; Viva Zapata!; Lawrence Of Arabia; Zorba The Greek), Rod Steiger (In The Heat Of The Night) and John Gielgud (Arthur; Gandhi; The Elephant Man), alongside the equally legendary Oliver Reed (Gladiator), Lion of the Desert is released on DVD and Blu-Ray by Anchor Bay Entertainment on 2nd July 2012.

The year is 1929 and Italian dictator Benito Mussolini faces a 20-year-long war waged by Bedouin patriots who are resisting Italian colonisation and the establishment of "The Fourth Shore" - essentially a re-birth of a Roman Empire in Africa. Hoping to crush the rebellion, Mussolini appoints the ruthless General Rodolfo Graziani, a man who would come to be known as the "Butcher of Fezzan".

Leading the resistance is Omar Mukhtar, a teacher by profession but a guerrilla by obligation, one who has committed himself to fighting a bloody war than he knows cannot be won in his lifetime. As tanks and airplanes are deployed in the desert for the first time, the Bedouin realize their primitive weaponry is no match for the might of the Italian Army. But, driven by courage and inspired by their leader, they continue to fight on. 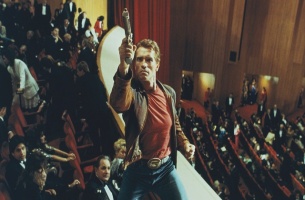 HotUHD
With the help of a magic ticket, a young movie fan is transported into the fictional world of his favourite action movie character in Last Action Hero, released on 4K UHD for the first time 17th May 2021 from Sony Pictures Home Entertainment. END_OF_DOCUMENT_TOKEN_TO_BE_REPLACED
Comments
Hot Pick

HotDVDBDTV
DCI Tom Brannick returns, as the murder of a crooked accountant unravels a trail of greed that threatens to expose the true identity of the legendary assassin, codenamed, Goliath in Bloodlands: Series 2 released on DVD and Blu-ray 14th November 2022 from Dazzler Media. END_OF_DOCUMENT_TOKEN_TO_BE_REPLACED
Top PicksView