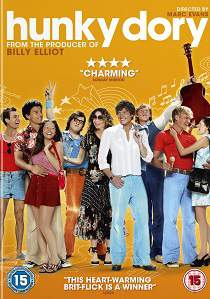 It's the long hot British summer of 1976 and Viv (Minnie Driver) has left London and her thespian aspirations, to work as a drama teacher in the local high school of her south Wales home town. Determined to fire up her hormonal, apathetic teenage charges, she sets about staging a rock musical based on Shakespeare's The Tempestfor the school's end of year show.

Battling the summer teenage distractions of love, lust and the local lido, Viv perseveres and rallies the group to express themselves through music and drama.

The shy and sensitive Davy (Aneurin Barnard) shows talent and promise as male lead Ferdinand, but his crush on the beautiful, yet flighty Stella (Danielle Branch) who plays female lead Miranda, only adds to the behind-the-scenes drama.

Spurned by Stella, Davy transfers his adoration to Viv, Stella discovers older boys, skinhead Kenny (Darren Evans) fights ridicule and self-doubt about being involved in the show at all and Evan (Tom Harries) is confused about his sexuality. Only the school's jovial headmaster (Robert Pugh) seems to be genuinely enjoying his role as Prospero and when the school hall burns down, the entire show looks likely to fall apart.

Adversity eventually pulls them together and all the angst and excitement of being on the brink of adulthood, is played out in an emotional, evocative and rousing musical climax...

Minnie Driver stars in Hunky Dory, released on DVD by Entertainment One on 25th June 2012.