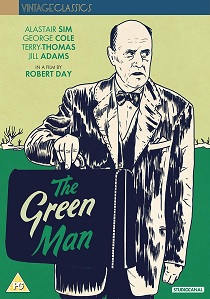 An irreverent black comedy adapted by Frank Launder and Sidney Gilliat from their play Meet A Body, The Green Man marked the directorial debut of camera operator Robert Day.

A scintillating Alastair Sim plays Hawkins, a timid watchmaker with a part time job - he is also a professional assassin who bumps off the people we love to hate. But when the philandering MP Sir Gregory Upshott (Raymond Huntley) is the intended target, vacuum cleaner salesman William Blake (George Cole) and Hawkins's new neighbour Ann Vincent (Jill Adams) repeatedly get in the way. As the time of the assassination draws ever closer and Hawkins tracks his victim to a dilapidated seaside hotel called The Green Man, the laughs and the tension steadily rise to a brilliant climax.

An enormously entertaining farce that ticks all the genre's boxes (mistaken identities, compromising positions, much panicking and slamming of doors), The Green Man makes an interesting companion piece to Ealing's The Ladykillers (1955).

The Green Man is released on DVD and Blu-ray 18th May 2020 from StudioCanal.

DVD
Arriving on DVD and Blu-ray 17th May 2021 from Acorn Media (UK), the hit police corruption drama from the makers of Bodyguard returns as Series Six of Line of Duty sees AC-12 facing their most ... END_OF_DOCUMENT_TOKEN_TO_BE_REPLACED
Hot PicksView