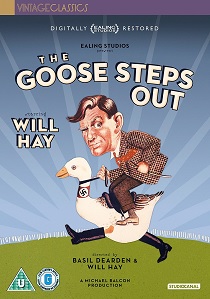 NewsComedy
News Article Go back to homepage
A brand new 75th anniversary edition of classic Will Hay comedy The Goose Steps Out comes to Blu-Ray for the first time and a new DVD on 15th May 2017 courtesy of StudioCanal.
Will Hay, Frank Pettingell, Charles Hawtrey, Peter Ustinov, Barry Morse
Basil Dearden, Will Hay
Michael Balcon
StudioCanal
1 hour 19 minutes
15/05/2017
#TheGooseStepsOut
Thank you for supporting DVD365.net when you order using the link(s) below. As an Amazon Associate we earn from qualifying purchases
Buy DVD
Buy BD
Information

A brand new 75th anniversary edition of classic Will Hay comedy The Goose Steps Out comes to Blu-Ray for the first time and a new DVD on 15th May 2017 courtesy of StudioCanal. Available fully uncut for the first time here in the UK, this Vintage Classics release has been restored and offers an array of exciting bonus content for Will Hay fans including a new interview with his biographer Graham Rinaldi. Co-directed by the much-loved slapstick comedian, this Second World War comedy favourite was also the directorial debut from soon to be Ealing regular Basil Dearden.

Inept schoolmaster William Potts (Will Hay: Oh, Mr Porter!, The Black Sheep of Whitehall) is mistaken for a Nazi spy by British Intelligence. When the real spy is captured, Potts is sent to Germany in his place to intercept plans for a new Nazi secret weapon being thought up by inebriate Professor Hoffman (Frank Pettingell: The Remarkable Mr Kipps). Upon his arrival Potts takes charge of a group of trainee spies and, in his own unorthodox fashion, teaches them the manners and customs of the British. Among the young spies are three pro-British Austrians (Charles Hawtrey: Carry On Films, Peter Ustinov: Poirot: Death on the Nile & Barry Morse: The Fugitive TV series), who question Potts's true motives yet manage to keep him out of trouble and assist his escape.

The Digital Film restoration was funded by StudioCanal in collaboration with the BFI's Unlocking Film Heritage programme (awarding funds from the National Lottery).

HotDVDBD
From the producers of Nobody and John Wick comes a bare-knuckle, coal-dark holiday action-comedy that says you should always bet on red as Violent Night sledges in on DVD and Blu-ray 6th March 2023 from Warner Home Video. END_OF_DOCUMENT_TOKEN_TO_BE_REPLACED
Top PicksView