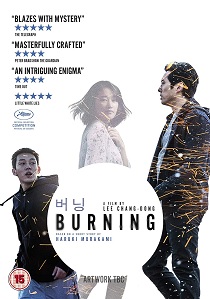 Adapted from a short story by Haruki Murakami, Lee Chang-Dong's Burning follows the story of deliveryman Jongsu (Ah-In Yoo), who is out on a job when he runs into Haemi (Jong-Seo Jun), a girl who once lived in his neighbourhood. Friendly and flirtatious, she asks if he can look after her cat while she's away on a trip to Africa and he happily obliges.

On her return, she asks Jongsu to meet her at the airport and promptly introduces him to Ben (Steven Yeun) - an enigmatic young man she met during her trip. As the group spend more time together, Jongsu slowly gets to know the inscrutable visitor - until one day, Ben tells him about his most unusual hobby.

Burning is released on DVD and Blu-ray 27th May 2019 from Thunderbird Releasing.