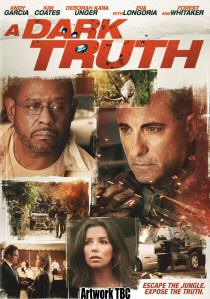 Garcia is the thinking man's action hero in this intense and thought-provoking tale. The film follows Jack (Garcia), a former CIA agent-turned-political talk show host who descends into the treacherous jungles of Ecuador to rescue a team of environmental activists (Whitaker and Longoria) caught up in the criminal corporate cover-up of a violent local massacre.

Written and directed by Damian Lee (Sacrifice), winner of the 2012 Best Director Award at the Boston Film Festival for his work on the film, A Dark Truth is a timely thriller about the ever-increasing depletion of earth's natural resource of water and the heroic men and women fighting to protect it. Co-starring Kim Coates (Resident Evil: Afterlife) and Deborah Kara Unger (The Game), the film is packed with action sequences and nail-biting suspense.

Exclusive to the DVD is "Behind the Truth", a behind-the-scenes featurette with cast and crew as they share inspirations and experiences making the film.

In the jungles of Ecuador, blood taints the waters. A multinational conglomerate's unholy alliance with a bloodthirsty military regime has resulted in a massacre. Only the rebel Francisco Franco (Forest Whitaker, Repo Men) and his determined wife Mia (Eva Longoria, TV's Desperate Housewives) can prove the truth. To settle a personal debt, former CIA agent Jack Begosian (Andy Garcia, Ocean's Thirteen) takes on the freelance assignment to rescue Francisco and risks everything in a brutal battle to expose the cover-up.

UHD
After more than thirty years of service as one of the Navy's top aviators, Pete 'Maverick' Mitchell is back where he belongs as Top Gun: Maverick flies onto DVD, Blu-ray and 4K UHD 31st October 2022 from Paramount Home ... END_OF_DOCUMENT_TOKEN_TO_BE_REPLACED
Top PicksView