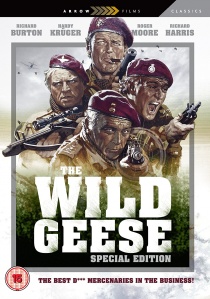 The trio of acting heavyweights star as the leaders of the film's eponymous group of heroes, a band of crack mercenaries hired by a British industrialist to penetrate a remote and hostile corner of the African wilderness and rescue a deposed political leader from a heavily guarded prison. While the prisoner is a man with noble visions of racial reform, the industrialist financing the operation cares only about his own business interests.

Meanwhile, sinister forces in the corridors of power have done a deal with the corrupt government, leaving the mercenaries stranded, their escape route cut off. Realising the rescue mission is no longer to his advantage the businessman decides to alter the course of events, setting off an explosion of violence. Forced to flee across treacherous terrain, the Wild Geese battle the marauding armies who will stop at nothing to prevent them completing their mission.

A high octane, thrill-ride directed by veteran action and western director Andrew V. McLaglen (The Sea Wolves; Chisum) and edited by John Glen (the director of the Bond movies For Your Eyes Only, Octopussy, A View To A Kill, The Living Daylights and Licence To Kill), The Wild Geese also stars Hardy Kruger, Stewart Granger, Frank Finlay, Barry Foster and Patrick Allen.