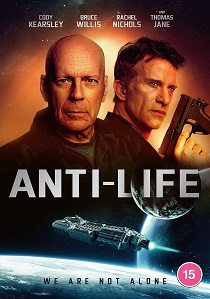 Set in the near future, a spaceship flees a devastating plague on planet Earth with a few thousand survivors on board - the last remnants of humanity. But the ship has a stowaway: a shape-shifting alien whose goal is slaughter everyone on board. Clay Young (Bruce Willis) and his team are a hardened group of mechanics picked to stay awake and maintain the interstellar ark

Anti-Life is released on DVD 15th February 2021 from Signature Entertainment.