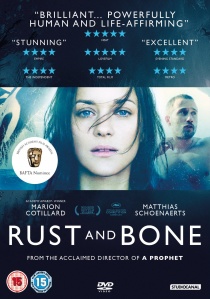 Following a theatrical opening to tremendous national and international acclaim and a Best Film Award at the London Film Festival in October, Jacques Audiard, acclaimed director of A Prophet and The Beat That My Heart Skipped, returns with this bruising and powerful drama about two people from very different worlds, seeking redemption in each other.

Ali (Matthias Schoenaerts - Bullhead) dreams of becoming a professional boxer. When he is suddenly put in charge of his five year old son, he moves in with his sister for support. While at his new job as a nightclub bouncer, he meets the beautiful and confident orca trainer, Stephanie (Academy Award® winner Marion Cotillard - The Dark Knight Rises, La Vie en Rose).

He gives her his number, not expecting that she will ever call. However, after becoming the victim of a tragic and life changing accident, Stephanie surprisingly turns to Ali for support. These lost souls discover new meaning in life together when Ali enters the dangerous world of underground boxing. Winner of several international awards, Rust And Bone, released on DVD and Blu-Ray on 25th February 2013 courtesy of StudioCanal, is one of the best and most talked about films of 2012.