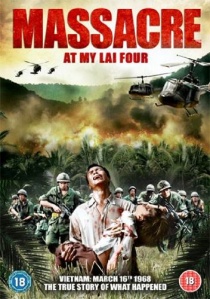 Massacre at My Lai Four, the brutal and hard hitting Vietnam war movie about the infamous massacre in March 1968 at the village of My Lai, is released on retail DVD by Scanbox Entertainment on 4th April 2011.

Freely adapted from the Pulitzer Prize-winning book by Seymour Hersh, it is the true story of Charlie Company, a platoon of American soldiers led by Lieutenant Wm. Calley.

They then join a larger group of soldiers who have taken over My Lai. Believing it to be a Vietcong hiding place, senior officers order a house-to-house search but Calley, who by now has become completely deranged, tells his men to massacre everyone they find even though there are only old women and children left in the village.

The atrocity is seen from the air by the crew of a small reconnaissance helicopter, pilot Chief Warrant Officer Thompson, co-pilot Andreotta and door-gunner Colburn. Deeply upset by what they see, the three young airmen land their helicopter and overpower their compatriots in an armed confrontation which stops the massacre and results in several villagers' lives being saved.

Lieutenant Calley and his men massacred 503 innocent people and this is their story.

HotDVDBDUHD
In celebration of its 25th anniversary, one of Luc Besson's most incredible movies, Leon, has been restored to stunning 4K and is being released on 4K UHD, Blu-ray and DVD 11th November 2019 from StudioCanal. END_OF_DOCUMENT_TOKEN_TO_BE_REPLACED
Top PicksView