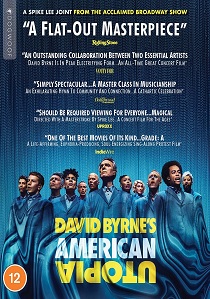 'Do we get stupider as we grow up?' In his wildly popular Broadway show American Utopia, David Byrne reflects on human connections, life and how on earth we work through it. He joins the dots with his music and it all starts making sense.

Work by James Baldwin, Janelle Monáe and Kurt Schwitters is highlighted among exhilarating renditions of Byrne's solo work, as well as Talking Heads classics. According to the multi-hyphenate, we love looking at humans more than anything else. Anti-fascist and anti-racist, Byrne illuminates our responsibility to care for one another as he and his co-performers burn down the house.

HotDVDBDDIGITAL
With stunning revelations, glamorous journeys, and the arrival of the Jazz Age, Downton Abbey: A New Era, released on DVD and Blu-ray 15th August 2022 from Warner Home Video, will be the Crawleys' biggest adventure yet as they grapple with their future and new intrigue about ... END_OF_DOCUMENT_TOKEN_TO_BE_REPLACED
Top PicksView