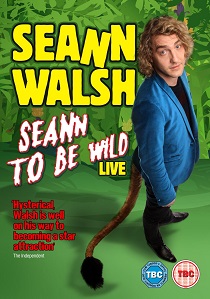 NewsStandup Comedy
News Article Go back to homepage
Seann Walsh is one of the most dynamic and charismatic young comedians to emerge in years and will be releasing his eagerly awaited debut live DVD Seann to Be Wild on 18th November 2013 via Universal Pictures (UK).
Seann Walsh
Richard Valentine
Alex Moody, Saurabh Kakkar
Universal Pictures (UK)
Unknown
18/11/2013
#SeannWalsh #SennToBeWild
Thank you for supporting DVD365.net when you order using the link(s) below. As an Amazon Associate we earn from qualifying purchases
Buy DVD
Information

Seann to Be Wild is the highly anticipated, debut live DVD from one of the most dynamic and charismatic young comedians to emerge in years. 2013 Edinburgh Fosters Comedy 'Best Show' Award nominee and star of Channel 4's Stand Up For The Week, Seann Walsh World and Big Bad World for Comedy Central, BBC1's Live At The Apollo and Michael McIntyre's Comedy Roadshow Seann Walsh, will be releasing his eagerly awaited DVD on 18th November 2013 via Universal Pictures (UK).

Recorded at London's Hammersmith Apollo, this DVD release will see one of the brightest talents on the UK comedy circuit dominate the stage with his charming and hilarious observational stories and unique physicality. Packed with hysterical personal anecdotes and observations we can all relate to, and mixing off- the-wall reflections on young modern life with wild physical humour - this is Seann Walsh at his finest and a must have DVD from one of the most exhilaratingly fresh talents around. The real wild cat of comedy!

As well as his masterful stand-up work, Walsh has also recently become a regular face on TV, starring in his very own series 'Seann Walsh World' on Comedy Central. He is also currently starring in Comedy Central's new sitcom Big Bad World alongside The Inbetweeners, Blake Harrison. Other recent TV appearances include: Channel 4's Comedy Gala Live At The 02 in both 2012 and 2013, Alan Carr: Chatty Man (Channel 4) Never Mind The Buzzcocks (BBC2), Celebrity Juice (ITV2), Mock The Week (BBC2), 8 Out Of 10 Cats (Channel 4).

Within two years of his first comedy performance, Seann was the winner of the Leicester Mercury Comedian of the Year. Shortly after, other accolades included; Chortle Best Breakthrough Act Nominee 2010 and Chortle Best Compere Nominee 2011 and most recently adding Fosters Comedy Best Show nominee 2013.