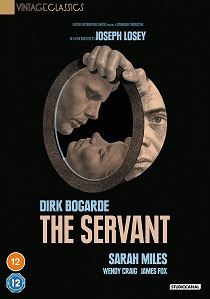 The new restoration of Joseph Loseys 1963 masterpiece The Servant is released on DVD, Blu-ray and 4K UHD 20th September 2021 from StudioCanal.

Adapted from Robin Maugham's short story, The Servant marked the first of three collaborations between Joseph Losey and celebrated playwright Harold Pinter. Nominated for five BAFTA's and winning three, including best actor for Dirk Bogarde and Best Cinematography for Douglas Slocombe, The Servant is notable for its ambitious technique and its willingness to engage with issues that were, at the time, never seen in British cinema.

Experienced manservant Barrett (Dirk Bogarde) starts working for foppish aristocrat Tony (James Fox) in his smart new townhouse. Much to the annoyance of Tony's girlfriend (Wendy Craig), Barrett slowly initiates himself into the house and begins to manipulate his master.