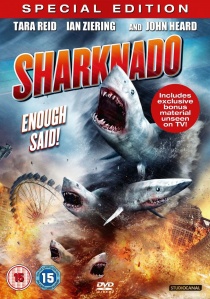 StudioCanal are delighted to announce the Home Entertainment release of the cult horror classic Sharknado. Following an exclusive release on Syfy in August 2013, and the resulting media frenzy, the film then entered US cinemas by popular demand. Available to own on DVD and Blu-ray on 7th October 2013, Sharknado stars Tara Reid (American Pie), Ian Ziering (Beverly Hills, 90210) and John Heard (Home Alone, The Sopranos). Sharknado is the ultimate B-Movie experience - hilarious, action-packed and blood-splattered!

When a freak tornado swamps Los Angeles, thousands of man-eating sharks are sucked into the swirling vortex, terrorizing the waterlogged populace and flooding the city with shark-infested seawater. Surfer and bar-owner Fin (Ian Ziering) sets out with his friends Baz (Jaason Simmons) and Nova to rescue his estranged wife April (Tara Reid) and teenage daughter Claudia from the sharks raining down from the skies. With nature's deadliest killer ruling sea, land, and air, they soon realise that the best chance they have to survive the deadly shark-infested maelstrom is to find a way to destroy it themselves.

DVD
Get lit in the stylish ensemble caper, The Gentlemen, a star-studded, sophisticated action-comedy written and directed by Guy Ritchie, released on DVD, Blu-ray and 4K UHD 27th April 2020 from ... END_OF_DOCUMENT_TOKEN_TO_BE_REPLACED
Hot PicksView