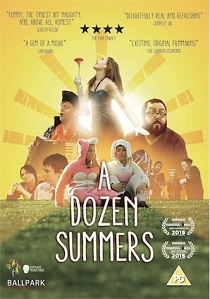 A Dozen Summers is a delightful, homegrown coming-of-age comedy drama set for DVD release on 15th August 2016 courtesy of Screenbound.

This heartwarming independent film stars a wealth of young talent and tells us what it's really like to grow up in the 21st Century. Get ready to enter the world of Maisie and Daisy McCormack, twin sisters who have just hijacked a children's film in order to tell their own story. In the process they address issues faced by all 12-year-olds such as family, friends, bullying and school life. A Dozen Summers is a movie that will strike a chord with the young and remind parents of their own childhood.

As well as a truly brilliant young cast, the film stars Ewan Macintosh (The Office) as a beleaguered shop keeper and Colin Baker (Doctor Who) as the narrator. This unique film is very much a family affair: written and directed by Kenton Hall, it stars his twin daughters Hero and Scarlett Hall as Maisie and Daisy. Kenton Hall also plays their father Henry, an eccentric author and a fountain of advice and wisdom for the girls.

This summer, bask in the glow of this magical tale that can be enjoyed by the whole family.