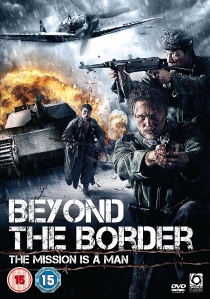 December 1942, Sweden is on the verge of being invaded. Two young soldiers leave their roadblock post to get to the Norwegian border to catch a glimpse of the occupying Nazis. Their adventure ends in a disaster, and the day after, Lieutenant Stenström finds out that one of the missing soldiers is his brother. Now he has to lead a rescue team behind enemy lines in a secret mission to retrieve his brother. Deep in the dark Norwegian woods Stenström realizes that many borders need to be crossed if they are to get out alive.

Beyond the Border is director Richard Holm's (Johan Falk - National Target and Johan Falk - Leo Gaut) intriguing drama about courage and love in the shadow of World War II. André Sjöberg (As it is in heaven, The Accident Rebel) who plays Stenström also wrote and produced the film together with co-writer/producer Johnny Steen.

BD
A detective in a small Pennsylvania town investigates a local murder while trying to keep her life from falling apart in Mare of Easttown, released on DVD and Blu-ray 13th September 2021 from Warner ... END_OF_DOCUMENT_TOKEN_TO_BE_REPLACED
Top PicksView