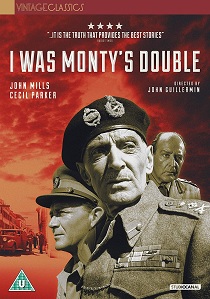 StudioCanal is delighted to announce the release of a newly restored version of the classic British war film, I Was Monty's Double, on 10th June 2019.

Released to coincide with the 75th Anniversary of D-Day on June 6, director John Guillermin's (The Towering Inferno, Death on the Nile) moving story based on true events and originally released in 1958 will be available to own on DVD, Digital Download and, for the very first time, on Blu-Ray, looking better than ever as part of the Vintage Classics collection.

Starring John Mills (Hobson's Choice, Ice Cold in Alex), Cecil Parker (The Lady Vanishes, The Ladykillers) and, in a stroke of casting genius, ME Clifton James (Blanche Fury, To Tell the Truth) playing himself, the new release comes complete with a host of extras material. The new digital restoration has been completed from a new 4k 16bit scan of the original 35mm negative.

I Was Monty's Double is the incredible and true story of how, during World War Two in the lead-up to D-Day, an out of work actor was recruited to impersonate General Montgomery as a decoy to mislead the Germans. With D-Day fast approaching, British officers Major Harvey (John Mills) and Colonel E.F. Logan (Cecil Parker) plot to give the Germans misinformation about their military strategy.

When Harvey spots an actor (M. E. Clifton-James), who bears a remarkable likeness to British military leader General Montgomery, he comes up with a plan to use him to impersonate the general in North Africa. Although 'Jimmy', as Harvey calls him, is initially doubtful he can carry off an impersonation of Montgomery convincingly, he nonetheless agrees and successfully draws German troops away from Normandy, becoming both a hero and a major military target.

But, with a team of German commandos being sent to kidnap 'Monty', has the plan worked a little too well?

DVD
Four years after South Korea's total decimation in Train To Busan, the zombie outbreak thriller that captivated audiences worldwide, the next nail-biting chapter in the post-apocalyptic world Train to ... END_OF_DOCUMENT_TOKEN_TO_BE_REPLACED
Hot PicksView