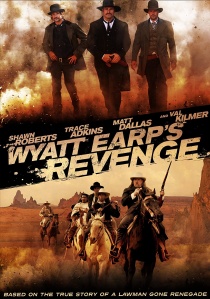 Based on the real life events from one of history's most famous lawmen, the film centers around an older Earp as he reflects on his celebrated career, focusing on how he assembled a posse to hunt down the outlaws who brutally murdered the love of his life.

Michael Feifer directs with the screenplay by Darren Benjamin Shepherd and story by Jeffrey Schenck and Peter Sullivan. Barry Barnholtz and Jeffrey Schenck are producing under the Hybrid Pictures banner and Peter Sullivan is co-producing (The Perfect Student). Michael Feifer and Zelma Kiwi also produce. Kilmer is back in familiar movie territory, having played Doc Holliday in Tombstone, as well as William Bonney in the 1989 telepic, "Billy the Kid".