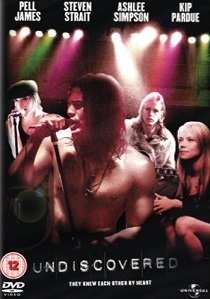 Undiscovered is a heartfelt, music orientated, grungy teen comedy starring singing sensation Ashlee Simpson, coming to DVD on 23rd April 2007 from of Universal Pictures (UK). Steven Strait (The Covenant) plays Luke Falcon, a struggling songwriter and rock musician who lives a life filled with passion, adventure and the unexpected; he decides to move from his home in New York City to Los Angeles, in hopes of finding fame. Just days before he leaves, a beautiful girl Brier (Uptown Girl, Broken Flowers) catches Luke's eye, nearly convincing him to stay put in NYC.

Putting his career first Luke makes the move the L.A., struggling for months to land a gig. He dedicates his life to his music, through his writing, his singing and his band - anything to make his mark on the record producers. One night in the audience, he spots his subway infatuation, Brier, also looking west with hopes of fame and fortune, and now enrolled at a well-respected L.A. acting school.

We follow Luke struggling to win Brier's affection's, putting his feelings into his music and dreaming of the day he finally gets signed to a record label. Brier and her friend, also a would-be actress, Clea (Ashlee Simpson, 7th Heaven) try to spruce up Luke's image to help him land a recording contract. But as his profile rises, so do the demands of his career, his underground lifestyle becomes a thing of the past as fame and fortune come knocking. Brier begins to realise that a relationship with a travelling musician may be a price she is not willing to pay.