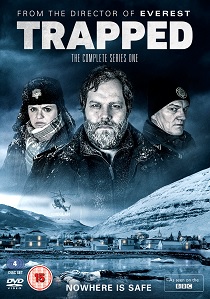 The series centres around a remote Icelandic town as a mutilated and dismembered body washes on the shore, an unidentifiable man murdered only hours ago. The local police chief, Andri (Ólafur Darri Ólafsson), whose personal life is in shatters, realises a killer has descended into his town. As word spreads, order disintegrates into chaos as the town's residents realise they are all possible suspects.

The series has reportedly received the highest budget invested into an Icelandic series and premiered to 1.2 million viewers on BBC Four. Trapped is under the direction of cinematic filmmaker Baltasar Kormákur who helmed last year's true-story epic Everest.

BD
An intimate and moving story of childhood memories, Belfast is available to own on Blu-ray and DVD 25th April 2022 from Universal Pictures (UK). END_OF_DOCUMENT_TOKEN_TO_BE_REPLACED
Top PicksView