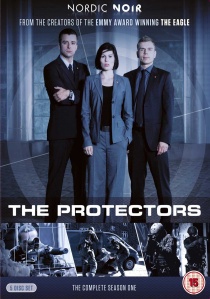 Arrow Films' Nordic Noir label is pleased to announce the UK DVD box set debut of a never-before-seen Danish series, The Protectors : The Complete Season One, on 18th March 2013.

One of the most popular TV shows in its Nordic homeland, The Protectors was filmed on location in Copenhagen and first aired on the DR channel in early 2009. Later that year, it won the coveted international emmy award for "best non-American television drama series".

From Mai Brostrøm and Peter Thorsboe, the co-creators of recent Nordic Noir breakout series "Unit One", The Protectors tells the story of P.E.T., the Danish national police force in charge of personal protection.

Responsible for the safety of high profile figures including Politicians, Royal Family, VIPs and visiting dignitaries, the P.E.T.'s work includes managing preventative measures, dealing with potential terrorist threats and keeping an eye on any dangerous individuals and stalkers.

Following their success with the likes of The Killing, Borgen, Wallander and The Bridge, Arrow continue to strive in bringing UK viewers the very best in Scandinavian television via their Nordic Noir label. While the aforementioned titles all aired on BBC4 prior to their DVD releases, Arrow have also enjoyed acclaim for bringing never-before-seen Nordic shows directly to UK living rooms via the home entertainments market.

Their passion and excitement for the genre found Arrow looking further into the Nordic catalogue and it was there that they discovered some fantastic, high quality shows, crying out for a new audience. 2013 has already seen the Nordic Noir label release Unit One, starring Mads Mikkelson and Above The Street Below The Water, starring Sidse Babett Knudsen, direct to UK fans via DVD and Digital Download; both have been received exceptionally well.