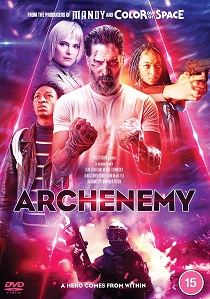 Max Fist is the hero we all need in these troubled times in Altitude's extraordinary sci-fi action adventure Archenemy, released 22nd February 2021 on DVD from Altitude Film Entertainment and other Digital platforms.

Max Fist was the greatest hero of a vast city in another universe. He saved his world from destruction but crashed through space and time... and wound up here - a desolate American suburb. Or so he says.

Powerless and a broken drunk, no one believes Max's stories about his glory days until he meets a kid called Hamster. When the mob comes after Hamster's family, Max must learn what it means to be a hero - here, now, without superpowers - one brutal blow at a time.

HotDVDBD3D-BDUHD
The grave course of events set in motion by Thanos that wiped out half the universe and fractured the Avengers ranks compels the remaining Avengers to take one final stand in Marvel Studios', Avengers: Endgame, released on DVD, Blu-ray, 3D Blu-ray and 4K-UHD 2nd September ... END_OF_DOCUMENT_TOKEN_TO_BE_REPLACED
Top PicksView