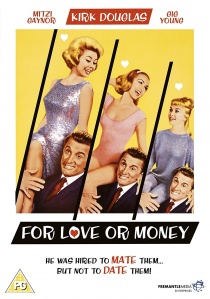 NewsComedyMusic
News Article Go back to homepage
A classic rom-com from Michael Gordon, For Love Or Money comes to DVD for the first time ever on 8th February 2010 courtesy of Fremantle Home Entertainment. Unavailable anywhere else in the world, this release represents a welcome opportunity to enjoy this rarely seen but unmissable and almost forgotten gem.
William Bendix, Julie Newmar, Thelma Ritter, Gig Young, Mitzi Gaynor, Kirk Douglas
Michael Gordon
Robert Arthur
Fremantle Home Entertainment
1 hour 48 minutes
08/02/2010
Thank you for supporting DVD365.net when you order using the link(s) below. As an Amazon Associate we earn from qualifying purchases
Buy DVD
Information

A classic rom-com from Michael Gordon, director of the Doris Day/Rock Hudson smash-hit Pillow Talk, For Love Or Money comes to DVD for the first time ever on 8th February 2010 courtesy of Fremantle Home Entertainment. Unavailable anywhere else in the world, this release represents a welcome opportunity to enjoy this rarely seen but unmissable and almost forgotten gem.

Notable for being the final film of actress and acclaimed musical entertainer Mitzi Gaynor's career, the film also stars movie legend Kirk Douglas (Spartacus; Paths Of Glory) brilliantly cast against his trademark 'hard man' type in an enchanting comedy of errors with a delightful and hilarious romantic twist.

When wealthy widow Chloe Brasher (Ritter) offers her attorney, Deke Gentry (Douglas), a sizeable sum of money to play matchmaker and pair up the husbands-of-her-choice with her three beautiful daughters, each of whom stands to inherit a fortune, he's convinced he's hit paydirt. But the task proves to be much more difficult than anticipated, especially when he realises that Chloe's idea of the perfect partner for perfectly-formed health addict Bonnie (Newmar) is a dull income tax investigator and that flighty bohemian Jan (Parrish) is to be paired with a prisoner-rehabilitation expert from San Quentin.

Even worse, every time Deke tries to set up eldest Brasher daughter Kate (Gaynor) with his playboy pal and food magnate Sonny Smith (Young), he somehow ends up spending the evening with her himself. Love begins to blossom between the pair but mother, money and many mirthful misunderstandings soon stand in the way of the budding romance. An infectiously endearing romantic comedy with more than its fair share of laugh out loud moments, For Love Or Money is a perfect comic showcase for its supremely talented cast and only makes one wish that Kirk Douglas had taken on more similar roles during the peak of his estimable movie career.

HotDVDBD3D-BDUHD
An ancient evil is unleashed after centuries of captivity and her lust for revenge threatens to destroy the world in The Mummy, a spectacular saga coming to 4K Ultra HD, 3D Blu-ray, Blu-ray, DVD and On Demand on 23rd October 2017 from Universal Pictures (UK). END_OF_DOCUMENT_TOKEN_TO_BE_REPLACED
Top PicksView