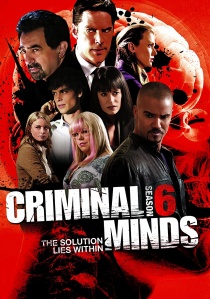 The tables have turned and psychopaths, murderers and stalkers are being hunted in the gripping and suspenseful Criminal Minds - Season 6 out on DVD from 28th November 2011 from Walt Disney Home Entertainment.

Criminal Minds revolves around an elite team of FBI profilers who analyse the country's most twisted criminal minds, anticipating their next moves before they strike again. This season, the team is handling more brutal occurrences than ever as they get into the criminal psyche to piece clues together, save innocent lives and bring the perpetrators to justice.

The Behavioural Analysis Unit's most experienced agent is David Rossi (Joe Mantegna), a founding member of the BAU who returns to help the team solve new cases and the team is lead by Special Agent Aaron Hotchner (Thomas Gibson), a strong profiler who is able to gain people's trust and unlock their secrets.

Other members include Emily Prentiss (Paget Brewster), the daughter of high-powered diplomats who used to work with Hotchner; Special Agent Derek Morgan (Shemar Moore), an expert on obsessional crimes; Special Agent Dr. Spencer Reid (Matthew Gray Gubler), a classically misunderstood genius whose social IQ is as low as his intellectual IQ is high; Jennifer "J.J". Jareau, (AJ Cook) a confident young agent who acts as the unit liaison for the team and Penelope Garcia (Kirsten Vangness), a computer wizard who helps research the cases. Each member brings his or her own area of expertise to the table as they pinpoint predators' motivations and identify their emotional triggers in the attempt to stop them.

Season 6 sees ritual murders, human trafficking and even a 'Prince of Darkness', as the bizarre crimes unfold and the team race against time to hunt down dangerous and frightening criminals. Crackling with sharp dialogue, gripping intrigue and heart pounding suspense action sequences, catch Criminal Minds on DVD this November.

UHD
Tom Hardy returns as the lethal protector Venom, one of Marvel's greatest and most complex characters in Venom: Let There Be Carnage, available on 4K Ultra HD, Blu-ray and DVD on 3rd January 2022 from Sony Pictures Home ... END_OF_DOCUMENT_TOKEN_TO_BE_REPLACED
Top PicksView