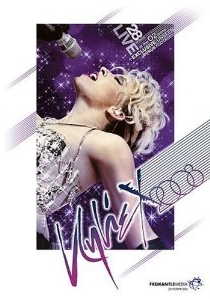 News
News Article Go back to homepage
Fremantle Home Entertainment is proud to announce the 1st December 2008 release of the pop DVD of the year: KylieX2008. Starring the Princess of Pop, this DVD captures Kylie Minogue in sensational live form at the end of the European leg of her spectacular KylieX2008 tour at London's O2 Arena in August 2008.
Kylie Minogue
Fremantle Home Entertainment
Unknown
01/12/2008
Thank you for supporting DVD365.net when you order using the link(s) below. As an Amazon Associate we earn from qualifying purchases
Buy DVD
Information

Fremantle Home Entertainment is proud to announce the 1st December 2008 release of the pop DVD of the year: KylieX2008. Starring the Princess of Pop, this DVD captures Kylie Minogue in sensational live form at the end of the European leg of her spectacular KylieX2008 tour at London's O2 Arena in August 2008.

Costing a breathtaking £10 million to stage, the KylieX2008 tour is the biggest and most expensive show that Kylie has produced to date, with performance tickets selling out to 120,000 eager fans with two hours of their release. Ever the byword for style, Kylie commissioned her head to toe couture worn throughout the performance to be exclusively designed by Jean Paul Gaultier. This set the sophisticated tone for an extraordinary visual and musical feast that celebrates a pop star who has been at the top of her game for over 20 years and shows no sign of relinquishing her crown!

Kylie Minogue's career is that rare thing in the world of pop - consistently fresh, cutting edge, seemingly forever enduring and always respectful of her many millions of fans from across the globe. Ten studio albums, two live CDs, seven live concert DVD's, plus her Greatest Hits and the Ultimate Kylie double album and 46 singles released internationally, all of which have been hits, culminate in the extraordinary experience that is KylieX2008.

Fans new and old will thrill to a sensational playlist (including some surprising cover versions) that spans such heart-warming classics like I Should be So Lucky, Step Back in Time and Shocked through to songs from her even more successful recent career like the golden-hotpants fun of Spinning Around, On a Night Like This, the Grammy award-winning Come Into My World and the aptly-titled Can't Get You Out of My Head, which a lot of deliriously happy fans worldwide would agree with!

28 songs including numerous hits, tracks from her latest album X and the previously unreleased Ruffle My Feathers and Flower are performed for this concert which fans will now be able to enjoy again and again in fabulous high definition and 5.1 sound that beautifully captures the atmosphere of a very special night with a true star and born entertainer. Through intimate and revealing special features on the DVD fans will also be able to get closer to the star. The exclusive documentary '12 Hours' takes the fan on a journey backstage on a Kylie tour from her waking in the morning to the final encore at the end of the show. Plus fans of the incredible look of the KylieX2008 tour can explore the striking visual elegance of the show through stage back-drop projections, costume designs and stage visualisations.

The beloved, the fabulous and the extraordinary force of popular musical nature that is Kylie Minogue: the most played female artist on UK radio over the last 20 years, has never been better than her London O2 performance of her KylieX2008 tour and the DVD is a unique snapshot of a career that has captured so many hearts worldwide, but especially in the UK where readers of both GQ and Glamour magazines voted her 'Woman of the Year' in 2006.