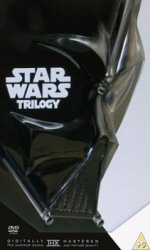 News
News Article Go back to homepage
Twentieth Century Fox Home Entertainment and LucasFilm Ltd present an exclusive version of the Star Wars Trilogy, beautifully re-packaged in a specially created and embossed Collectors Tin Edition as a limited edition of 30,000 copies and available to own from 12th November 2007.
Twentieth Century Fox Home Entertainment
Unknown
12/11/2007
Thank you for supporting DVD365.net when you order using the link(s) below. As an Amazon Associate we earn from qualifying purchases
Buy DVD
Information

Twentieth Century Fox Home Entertainment and LucasFilm Ltd present an exclusive version of the Star Wars Trilogy, beautifully re-packaged in a specially created and embossed Collectors Tin Edition as a limited edition of 30,000 copies. Available to own from 12th November 2007, the Collectors Tin Edition comes complete with a disc of exclusive special features, making this the perfect Christmas gift for Star Wars fanatics everywhere!

Episode IV - A New Hope: Luke Skywalker, a young farm boy from Tatooine, is thrust into the struggle of the rebel alliance when he meets Obi-Wan Kenobi, who has lived for years in seclusion on the desert planet. Obi-Wan begins Luke's Jedi training as Luke joins him on a daring mission to rescue the beautiful rebel leader Princess Leia from the clutches of the evil Empire.

Episode V - The Empire Strikes Back: Three years later, Imperial forces continue to pursue the rebels. After the rebellion's defeat on the ice planet Hoth, Luke journeys to the planet Dagobah to train with Jedi Master Yoda, who has lived in hiding since the fall of the Republic. In an attempt to convert Luke to the Dark Side, Darth Vader lures young Skywalker into a trap in the Cloud City of Bespin...

Episode VI - Return Of The Jedi: In the epic conclusion of the saga, the Empire prepares to crush the rebellion with a more powerful Death Star while the rebel fleet mounts a massive attack on the space station.

See the original three Star Wars films as they were meant to be seen as each of George Lucas' masterpiece films has been digitally restored and re-mastered by THX for superior sound and picture quality. The special features disc includes hours of bonus material including the most comprehensive feature-length documentary ever produced on the Star Wars saga, and never-before-seen footage from the making of all three films.

HotDVDBDDIGITAL
With stunning revelations, glamorous journeys, and the arrival of the Jazz Age, Downton Abbey: A New Era, released on DVD and Blu-ray 15th August 2022 from Warner Home Video, will be the Crawleys' biggest adventure yet as they grapple with their future and new intrigue about ... END_OF_DOCUMENT_TOKEN_TO_BE_REPLACED
Top PicksView