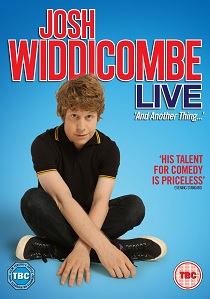 Josh Widdicombe Live: And Another Thing (2013)

Josh Widdicombe, stand-up sensation and star of Channel 4's The Last Leg and Stand Up For The Week will be releasing his debut DVD on 18th November 2013 via Universal Pictures (UK). Josh Widdicombe Live - And Another Thing... is Josh's highly anticipated debut DVD release and set to become one of the must-buy comedy DVD's of the year.

Recorded at London's Hammersmith Apollo, viewers of this tale twisting perfectionist can expect an insight into Josh's everyday annoyances and gripes with the aid of an assortment of items from a packet of love hearts to a set of passport photos, stories of his flat mate's oddities and other perils of young bachelorhood.

Delivered with his unique Devonian style and trademark wit, Josh proves that even the most mundane aspects of life can be turned into unbelievable accounts with hilarious consequences. The debut offering from Josh Widdicombe will leave the most hardened comedy fans with belly bursting laughter, telling their friends for weeks And another thing...

Widdicombe's quick-witted and insightful observational comedy has propelled him to being regarded as one of the best up-and-coming acts on the UK circuit. The past 18 months have been momentous, not only embarking on a series of successful national tours and three sell out runs at the Edinburgh Fringe Festival (including a Fosters Comedy Award nomination in 2011).

Now an established presence on our television screens, Josh is in hot demand for television and radio appearances. His recent TV credits include three series of the critically acclaimed hit Channel 4 show The Last Leg, with regular appearances on BBC1's Mock The Week, Channel 4's 8 Out Of 10 Cats, and Channel 4's Comedy Gala in aid of Great Ormond Street Hospital' both in 2012 and 2013.

HotUHD
After moving to a new town, two brothers discover that the area is a haven for vampires as the classic The Lost Boys is released on 4K UHD 20th September 2022 from Warner Home Video. END_OF_DOCUMENT_TOKEN_TO_BE_REPLACED
Top PicksView