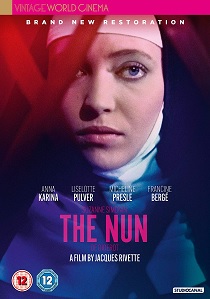 StudioCanal are delighted to announce that, following its selection for Cannes Classics 2018 and its recent screening at the Cinema Ritrovato in Bologna, Jacques Rivette's controversial French New Wave The Nun (La Religieuse) will make its UK Premiere on DVD and Blu-ray on 17th September 2018.

Banned for two years upon release for its controversial subject matter, with an exception granted for it to premiere at the 1966 Cannes Film Festival to great acclaim, Jacques Rivette's The Nun is a gem of the French New Wave, encapsulating the turbulent years of the Gaullist government and political instability of France in the 1960s. Adapted from the 18th-century novel by Denis Diderot, the author of The Lumieres, the film stars Anna Karina (Alphaville, Pierrot le fou) as Suzanne Simonin, a young woman removed from her family home to become a nun against her will. The character of Suzanne becomes, with Diderot, an allegorical figure of freedom of speech and revolt.

In the XVIII century, Suzanne Simonin (Anna Karina) is locked in a convent against her will. She finds for a while some comfort with the Mother Superior, but then she dies and is replaced by a sadistic woman than cannot stop blaming and punishing Suzanne. The young lady gets the right to move to another convent, however, she remains determined to recover her freedom.

Jacques Rivette's adaptation is faithful to the novel and takes up the three central acts that describe the distinct aspects of the relationship between Suzanne Simonin and her Mothers Superiors: first, compassion and kindness, then sadism and intolerance, and finally: attraction and sexuality. Jacques Rivette's The Nun appears as a manifesto in line with the French New Wave, transforming this 18th century chronicle into a contemporary questioning of freedom.

Jacques Rivette (1928 - 2016) was a French film director and film critic, known for his contributions to the French New Wave and the influential magazine (dubbed the 'instrument of combat' of the New Wave) Cahiers du Cinéma, of which he was editor throughout the first half of the 1960s. Extremely prolific throughout his career, Rivette made twenty-nine films, best known among them L'amour fou (1969), Out 1 (1971) and La Belle Noiseuse (1991).

The restoration of The Nun was made in 4K from the original film negative. The 4K resolution reproduces all the information and the details from the 35mm film and re-establishes on big screen the beauty of Jacques Rivette's images and the delicacy of Alain Levent's photography. The sound has also been restored from the negative sound (the only compliant element).

This restoration was carried out by the laboratory L'immagine Ritrovata under the supervision of StudioCanal and Mrs. Véronique Manniez-Rivette, and lasted five months, benefiting from the support of the French National Center For Cinema And Animated Image, The French Cinematheque and the Franco-american Cultural Fund-DGA-MPA-SACEM-WGAW.

Possessor, released on DVD and Blu-ray 8th February 2020 from Signature Entertainment, follows an agent who works for a secretive organisation that uses brain-implant technology to inhabit other people's bodies and drive them to commit assassinations for high-paying clients.

Mark and Jez are a couple of twenty-something roommates who have personalities that are completely opposite to each other - and with absolutely nothing in common. Series four sees the mayhem continue with Mark desperately trying to get out of marrying Sophie.
Movie quote