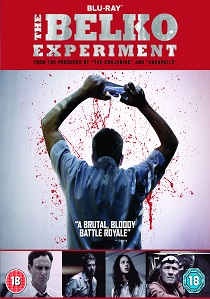 From writer, producer James Gunn (Super, Slither), director Greg McLean (Wolf Creek, Rogue, The Darkness) and producer Peter Safran (The Conjuring, Annabelle), comes the story about a group of 80 American employees who are tested in a twisted social experiment of bone-crunching horror!

Belko Industries, a normally calm workplace, gets a rude awakening when a mysterious voice on the intercom orders them to participate in a ruthless game of kill or be killed in a blood-soaking battle royale at their office building in Bogota?, Colombia. As the terror escalates, so does the body count. Everyone is a competitor and everyday objects become deadly weapons. Let the corporate carnage commence!

The Belko Experiment, released on DVD and Blu-ray 21st August 2017 from Twentieth Century Fox Home Entertainment, is a terrifying, provocative and at times hilarious thrill-ride that literally provokes the question; what does it take to survive at work?

BD
In The Little Things, released on DVD and Blu-ray 10th May 2021 from Warner Home Video, Kern County Deputy Sheriff Joe "Deke" Deacon is sent to Los Angeles for what should have been a quick evidence ... END_OF_DOCUMENT_TOKEN_TO_BE_REPLACED
Top PicksView