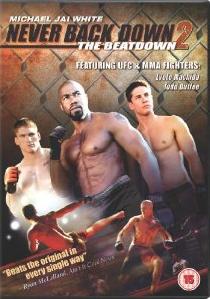 Featuring more thrilling and jaw dropping fight sequences than the original; Never Back Down 2: The Beatdown hits Unrated DVD on 12th September 2011 from Sony Pictures Home Entertainment. Starring America's number one martial arts action star Michael Jai White (Black Dynamite, Blood and Bone) in his directorial debut, Never Back Down 2: The Beatdown returns to the adrenaline pumped underground world of MMA fighting, as a group of four college-aged fighters must learn the most intense fighting techniques and go head-to-head in a punishing Beatdown competition.

Behind the closed doors of a seemingly normal college, the ultimate showdown in underground MMA fighting is being planned. Ex-MMA rising star Case Walker (Michael Jai White) trains four college-age fighters, each with their own individual obstacles. Case will instruct them to master the most mind-blowing fighting techniques and go head to head in the most punishing competition ever devised - The Beatdown. Featuring UFC Champion Lyoto Machida, MMA fighter Scottie Epstein and UFC fighter Todd Duffee.