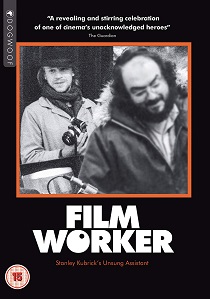 Following its critically acclaimed theatrical release, Filmworker - the remarkable story of Leon Vitali, the up-andcoming actor who gave up fame and fortune to serve for decades as legendary director Stanley Kubrick's righthand man - is set for its DVD debut.

Filmworker is a compelling documentary charting Vitali's work with the maestro and their unique relationship and arrives on DVD 23rd July 2018 and is available now on demand from Dogwoof.

As a long-time admirer of Stanley Kubrick's work, it was Vitali's dream come true when he landed the role of 'Lord Bullingdon' in Barry Lyndon. His performance was highly acclaimed and a wealth of prestigious film, television and stage offers flooded on, but they weren't to be. Having become enthralled by the director's all-encompassing process of creation, the actor sacrificed his flourishing career to take on the humble role of assistant to the master filmmaker. For more than two decades, he played a crucial role behind-the-scenes helping Kubrick make and maintain his seminal body of work.

In Filmworker, Leon Vitali's candid, often funny, sometimes shocking experiences in the company of Kubrick are woven together with rich and varied elements including previously unseen photos, videos, letters, notebooks, and memos from Leon's private collection.

Filmworker enters the world of Leon Vitali and Stanley Kubrick from a unique perspective that highlights the nittygritty of the creative process. By experiencing Leon Vitali's journey, we come to understand how the mundane gives rise to the magnificent as timeless filmmaking is brought to life at its most practical and profound level.

DVD
For the first time in the cinematic history of Spider-Man, our friendly neighborhood hero's identity is revealed in Spider-Man: No Way Home, released on DVD, Blu-ray and 4K UHD 4th April 2022 from Sony Pictures Home ... END_OF_DOCUMENT_TOKEN_TO_BE_REPLACED
Top PicksView