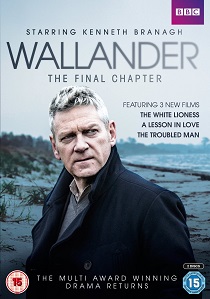 Released on DVD and Blu-ray on 4th July 2016 courtesy of BBC Worldwide, Kenneth Branagh returns for the final time as Detective Kurt Wallander in the BAFTA award-winning series based on the novels by Henning Mankell.

These three final thrilling stories were filmed in South Africa, Sweden and Denmark. In The White Lioness Wallander is drawn into the case of a missing Swedish national while attending a police conference in South Africa. It is the start of an emotional journey that leads him from the aching beauty of rural Africa to the intense poverty of its urban townships.

The second film sees Wallander back in Sweden where a woman's body is discovered half buried in the forest swamps. When it transpires the victim's daughter has also gone missing, Wallander must catch the culprit before he has another death on his conscience. And in The Troubled Man Wallander is in a race against time as he embarks on his final case - the disappearance of his daughter's father-in-law.

Extras include an interview with late author Henning Mankell. A box set Wallander: The Complete Collection is also available on DVD and Blu Ray and is released on the same date.

BD
An intimate and moving story of childhood memories, Belfast is available to own on Blu-ray and DVD 25th April 2022 from Universal Pictures (UK). END_OF_DOCUMENT_TOKEN_TO_BE_REPLACED
Top PicksView