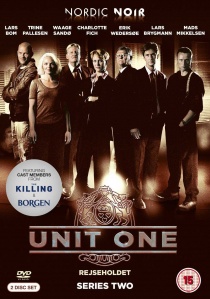 Following the overwhelming response to the season one release back in January, Arrow Films' Nordic Noir label is pleased to announce the UK DVD box set debut of Unit One: Series Two on 22nd July 2013.

Based on actual, real-life Danish crimes which have occurred across the last 2 decades, the International Emmy award winning Unit One is one of the hardest hitting of the Scandi-crime series. It follows an elite mobile police force, referred to as a flying squad, as they are dispatched to assist local police in solving some of the most complex and high profile cases Denmark has ever bore witness to.

Starring alongside Mads Mikkelson (Hannibal, The Hunt, Casino Royale, Pusher), who won the Best Actor Award at the 2012 Cannes Film Festival, are some of Denmark's brightest and best-loved actors, as seen on UK screens in The Killing, Borgen andWallander.

Exhilarating and fast-paced, we follow the fascinating and dangerous world of the Unit One squad as they immerse themselves in the Danish underworld. Prepare to be thrilled by their commitment and affectionate solidarity, yet puzzled by the often horrifying examples of human nature they face in their day-to-day work.

Unit One asks many questions of the heroes and heroines portrayed in the show, such as what happens to those in real life who have chosen a career such as the ones portrayed in the series? A member of the flying squad is away from home 230 days a year, can a marriage and a family cope with that? What qualifications? What dedication? What kind of team spirit do these men and women possess in order to achieve one of the highest success rates in the world?

Following their success with the likes of The Killing, Borgen and The Bridge, Arrow continue to strive in bringing UK viewers the very best in Scandinavian television via their Nordic Noir label. While the aforementioned titles all aired on BBC4 prior to their box set releases, Arrow have also enjoyed acclaim for bringing never-before-seen Nordic shows directly to UK living rooms via the home entertainments market.

Their passion and excitement for the genre found Arrow looking further into the Nordic catalogue and it was there that they discovered an array of fantastic, high quality shows, crying out for a new audience.

In addition to Unit One: Series One, 2013 has already seen the Nordic Noir label release Above The Street Below The Water, starring Sidse Babett Knudsen, The Protectors and Van Veeteren direct to UK fans via DVD and Digital Download; all of which have been received exceptionally well. 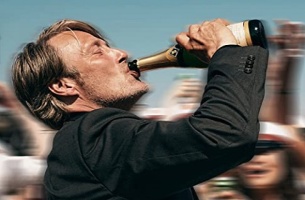 HotDVDBD
From director Thomas Vinterberg, Another Round, the intoxicating winner of the 2021 Academy Award® for Best International Feature Film, is released on DVD and Blu-ray 27th September 2021 from StudioCanal. END_OF_DOCUMENT_TOKEN_TO_BE_REPLACED
Comments
Hot Pick