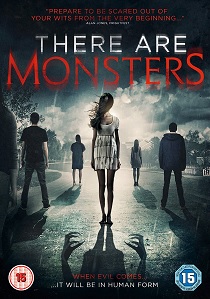 NewsHorror
News Article Go back to homepage
The world is being taken over - slowly, quietly and efficiently - by monsters... and they look just like us. There Are Monsters is released on DVD 22nd May 2017 from Elevation Sales.
Michael Ray Fox, Matthew Amyotte, Jason Daley, Loretta Yu, Michael Ray Fox, Suzanne Hawkins
Jay Dahl
Jay Dahl, Bill Niven
Elevation Sales
1 hour 30 minutes
22/05/2017
#ThereAreMonsters
Thank you for supporting DVD365.net when you order using the link(s) below. As an Amazon Associate we earn from qualifying purchases
Buy DVD
Information

The world is being taken over - slowly, quietly and efficiently - by monsters... and they look just like us. Written and directed by Jay Dahl, the documentary-style horror There Are Monsters is released on DVD 22nd May 2017 from Elevation Sales.

The film follows a crew of student film-makers who embark on a road trip as part of their latest project. While out filming, the group make a horrifying discovery as they capture evidence that evil creatures who can disguise themselves as people are slowly and quietly wiping out the human race and taking over the world. Realising they are in grave danger, the friends are forced to go to extreme lengths to try and survive.