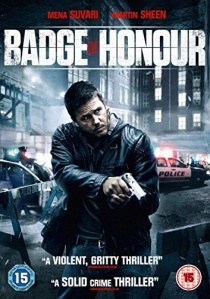 After arresting her own partner and testifying against him, police officer Jessica Dawson (Mena Suvari; American Horror Story, Rumour Has It, Six Feet Under, American Beauty, American Pie) is forced to transfer to Internal Affairs to investigate a teen's suspicious killing by 2 police officers and their overly-optimistic police captain (Martin Sheen; Amazing Spiderman 1 & 2, The Departed, Wall Street, The West Wing, Apocalypse Now).

The closer she gets to the truth, the worse her life becomes until eventually she discovers a man has been hired to kill her. She must fight for her life and see that justice is served!

Badge Of Honour is released on DVD by 6th April 2015 courtesy of High Fliers Films.