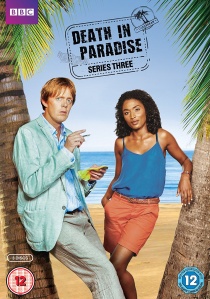 After the success of its first two series, Death in Paradise returns to BBC DVD for a third run of murder and mystery on the fictional island of Saint-Marie, but with a shocking twist of events - DI Richard Poole, played by Ben Miller (Primeval, Armstrong & Miller) is murdered!

Humphrey's apparently random and disorganised approach to solving crime initially seems confounding, but it's not long before they realise they have a remarkable detective in their midst - one capable of solving his predecessor's own baffling murder - and together the team go on to brilliantly solve a host of dizzyingly mystifying murders, from zombie film stand-ins, to glamorous stewardesses and local politicians. All in a day's work when there's death in paradise...

Recently recommissioned for a fourth series after its current third series has gone from strength to strength in the ratings, fans of the hit BBC One series can enjoy Death in Paradise - Series 3 on DVD from 10th March 2014. DVD extras include 'Behind-the-Scenes' footage and 'Outtakes' from the show.