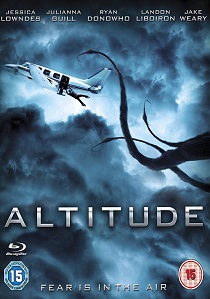 Fans of Donnie Darko, old school Twilight Zone episodes and the Final Destination movies will find plenty to keep them satisfied with Andrews' claustrophobic, character-driven, SFX extravaganza that sees a group of teenagers getting much more than they bargained for on their way to a Coldplay concert.

When five friends - Sara (Lowndes), Mel (Guill), Cory (Donowho), Bruce (Liboiron) and Sal (Weary) - decide to turn a trip out of town to see Coldplay in concert into a weekend getaway, rookie pilot Sara offers to fly them there in a rented plane. Shortly into the flight, the plane's instruments inexplicably begin to malfunction and a mechanical failure results in the plane heading into a steady, unstoppable climb. Worse, a massive electrical storm is closing in on their flight path, their fuel is rapidly running out and emotional tensions within the confines of the small aircraft are beginning to rise.

But the problems onboard prove to be the least of the friends' worries. Outside, hidden in the depths of the storm clouds, a mysterious and monstrous force is lurking. Its sole purpose is to destroy the plane and its passengers. However, unknown to the others, one of the group has the power to stop prevent the disaster from ever happening.

A movie that takes the themes of fear of the unknown and the power of the imagination to terrifying new heights, Altitude is a stunning debut from a director who is definitely a talent worth keeping an eye on for the future.